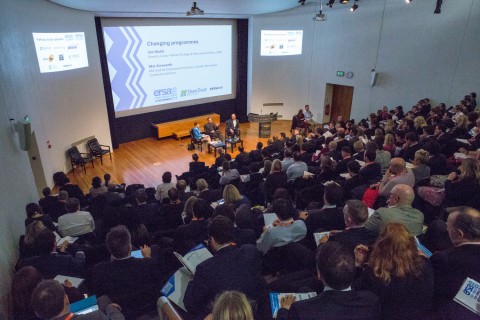 Plenary 1:  Changing programmes
In the first plenary session of the day, Iain Walsh (DWP) outlined the three key drivers for the department over the spending review: the roll out of Universal Credit; health and disability reform; and value for money. He also touched on devolution highlighting that the DWP will be closely working with seven local areas to commission employment support. Mat Ainsworth (Greater Manchester Combined Authority) highlighted the issue of matching local and national commissioning strategies. He said that, in Greater Manchester, the devolution deal outlined ‘terms of engagement’ but that there is still a lot to be worked out.

Ministerial address: Rt Hon Priti Patel MP, Minister of State for Employment
Priti Patel highlighted her commitment to integrating services and flagged that this work would be supported by the devolution agenda, linking in with the knowledge and services of local authorities.  She challenged the sector to be innovative and to build on employer work and support.

A full transcript of Priti’s speech can be found here.

Jobseeker showcase
Former jobseeker Andre Ferguson explained how his drive to create services for deaf children, following his daughter’s loss of hearing, had given him the passion to start the deaf support charity Meaka Bears. He spoke about the support that PeoplePlus had given him to make this happen through the Work Programme. A video of Andre’s speech can be found here and conference attendees were gifted a Meaka Bears branded bag.

Plenary 2: Changing organisations, changing markets
Matt Thurston (DWP) highlighted that he wanted organisations to be less reliant on DWP funding. He confirmed that that the Work and Health Programme would use a Payment by Results model but that there would be some balance with service fees. He also stated that he wanted a performance management structure with teeth and that the bidding process would include a face-to-face interrogation of bids, challenging providers to do put in bids they could realistically deliver. Nick O’Donohoe (Big Society Capital) spoke about the need for government to be transparent during the bidding process, to avoid social sector organisations putting in costly bids before finding they are ineligible for certain reasons at a late stage of the process. Penny Shimmin (Sussex Community Development Association) said that as a small organisation it was still possible to thrive under the current environment, utilising the strength of local knowledge. Roy O’Shaughnessy (Shaw Trust) highlighted that there needed to be a cultural shift towards organisations working in partnership with jobseekers.

Plenary 3: Changing work – changing lives
Leslie Wolfe (Maximus) said that there needs to be a clearer road map for jobseekers from the beginning, including moving between programmes and agencies. Darren Coppin (Esher House) looked at behavioural science and how it can help the sector to understand our work with jobseekers. He admitted that behavioural science can be hard to follow because often this learning goes against our impulses. David Hughes (NIACE) focused on four things: driving people towards work; building people’s confidence; helping people progress in the workplace; and, supporting people to stay in work later in their lives.

The second step: helping people move up in employment
James Holland from DWP explained that while we know a lot about what works in labour market activation policies, there is little evidence around progression. DWP will be running a progression pilot that will cover 15,000 people in randomised control trials, which will include an element of mandation. The pilot will be tracking people who have taken part over a few years. Mat Ainsworth from Greater Manchester said that the Working Well expansion will include 1500 people who are already in work, so will include element of progression work. They are also looking to push a Greater Manchester living wage.

Show me the money: A deep dive into the world of DWP finances
George Selmer and Josh Allerson, Directors of ThinkWinDo a new public services delivery consultancy, led the session on their report examining how DWP has spent its cash over 2012 -15. Some points to note were in the period July 2014 – July 2015 total DWP spend was £3.7bn, of which just 22%, £800m, was employment programmes. Corporate spend (includes network support, postage, consultancy and support for credit unions) accounted for 63% and the largest recipient of funding from this corporate amount was Telereal Trillium who were paid £509m.

ESF: Policy strategy and design
Rachel Radice from the DWP and Sue Ormiston and Ramona Herdman of the Big Lottery Fund (BLF) gave the group an interesting insight into the different approaches to tendering by two ESF Co-Commissioners. BLF will tender opportunities for ESF funding from all 38 LEPs who have opted in and are particularly interested in local providers and partnership delivery models. In lessons learned, they referred strongly to the importance of having real and evidenced local knowledge – generic “scatter gun approach” bids were marked down or excluded. The DWP has 29 LEPs who have opted into their ESF opportunities, although more may opt in at a later date. The DWP funding model has a strong element of PBR but has a delivery fee paid over the life of the contract. Providers will propose their own volumes and bids will be marked on an 80% quality/20% price basis.

Designing better services
Jo Blundell (Future Public) walked delegates through the principles of good design in public services as a way of approaching problems, challenging people to think about whether we really understand the problem and what it really is. Design typically uses ethnographic techniques, observing how people behave – not just what they say, they think or do. Jo highlighted that an important lesson is to fail, fail often and fail quickly to build on the learning. Women Like Us and L&Q have already supported 96 female residents through their joint programme (exceeding targets into work of 30%) and talked through the development of their next project providing support to in-work claimants.

Integrated services
Jo Casebourne (Institute for Government) talked through the ten insights from the IfG’s recent paper on local integration and the focus on different mechanisms for spreading best practice. Graeme Cooke updated delegates on the work in Islington to improve the integration of health and employment services in the borough. Graeme spoke about how Islington has gone about achieving system change by targeting funding, infrastructure and practice.

Data Plus: The power of data
Dan Jones (Nesta) spoke about the potential often being missed for using data, highlighting that, even in more data-savvy companies, a surprising amount base the majority of decisions on gut feeling. Tracey Gyateng from New Philanthropy Capital (NPC) spoke about the Justice Data Lab which NPC successfully established to help organisations understand their own performance and the level of risk they might be taking on with payment by results contracts. NPC is looking to develop a version of the Data Lab for the employment support sector to help build the evidence base, which will need support from the sector.

Future of Disability Services
In this well attended breakout session, Hugh Pullinger (DWP) outlined the role of the new Health and Work Unit, emphasising that the unit would increase recognition of work as a clinical outcome. Matt Oakley (SMF) described the challenge government faces to halve the disability employment gap and emphasised that sustainable jobs would play a key role in addressing this aim. Ellis Rainsford (St Loye’s Foundation) updated delegates on the new Specialist Employment Support programme, highlighting the importance of service integration to best support jobseekers with disabilities and long term health conditions.

Dynamic Youth Services
Focusing on innovative approaches to supporting young people to fulfil their potential, Belinda White (MyGo) emphasised the importance of creating inclusive services, which all young people could access She also highlighted the value of partnership working, as well as peer led initiatives. Jo Rice (Resurgo), who won the ERSA Youth Employment Award in 2015, outlined how intensive pre-employment support can prepare young people for the world of work through taking a partnership approach and offering in-work support.