Resource Tag: Resource for the Industry 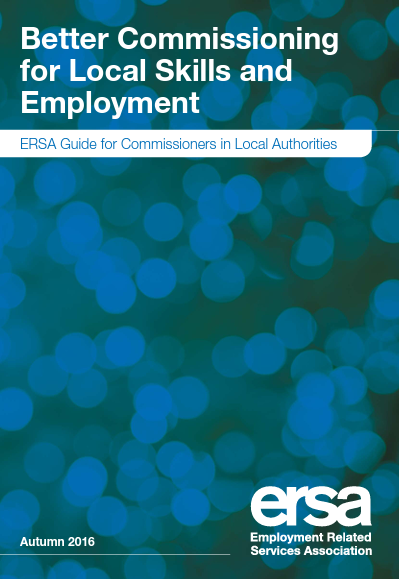 This document has been developed by the Employment Related Services Association (ERSA), the representative body of the employment support sector, to support local authorities in relation to employment and skills commissioning.

A definitive guide to disability inclusion in the workplace (May 2022)

With the transition to remote work opening up new opportunities to everyone, Ben has created this guide that walks businesses through every step in creating inclusive workplaces for employees with disabilities.

It covers a lot of important considerations, such as:

Here are just a handful of the insights we delve into:

The Real Level of Unemployment 2022: The myth of full employment across Britain

This report presents an alternative set of unemployment figures for every district and unitary authority in Great Britain. It is the sixth in a series of similar reports dating back to 1997.

The report explains how official measures of unemployment fail to adjust for distortions arising from the operation of the benefits system and how the very large numbers of incapacity-related claimants hide substantial unemployment.

Drawing on official statistics and proven methods, the report estimates that in early 2022 the real level of unemployment across Great Britain as a whole was just over 2.3 million. This compares with 1.77 million on the claimant count and only 1.31 million on the government’s preferred measure based on ILO criteria and the Labour Force Survey.

The report estimates that there are some 790,000 ‘hidden unemployed’ on incapacity benefits. These are men and women who might have been expected to be in work in a genuinely fully employed economy. They do not represent fraudulent claims and they account for slightly less than a third of the headline total of incapacity claimants of working age.

The real level of unemployment is estimated to be broadly the same as in 2017, when similar figures were last produced, but remains lower than the levels in the immediate wake of the financial crisis or in the 1990s.

Hidden unemployment is disproportionately concentrated in the weakest local economies, particularly Britain’s older industrial areas and a number of seaside towns. In the worst affected places, the estimated real rate of unemployment exceeds 10 per cent of all adults of working age.   By contrast, in substantial parts of southern England outside London the rate is around 2 per cent.

The report concludes that whilst some parts of Britain are now at or close to full employment, the economy as a whole is still some way off and substantial unemployment persists in other parts of the country.

The data for unitary and district local authorities shows that in 2022 there are really three different Britains:

The report argues that Levelling Up has a key role to play in reducing unemployment in less prosperous areas and there needs to be help too, including from employers, in maintaining labour market engagement among men and women with ill health or disabilities.

Centre for Regional Economic and Social Research
Social and Economic Research Institute
ERSA is hosting an online event to share and debate these findings with Professor Steve Fothergill on 10 June 2022, 11am -12.30pm, register via ersa.org.uk/events.

This sets out DWP’s plan to address the challenge of fraud, to stay ahead of evolving threats, and to reduce the levels of fraud and error in the welfare system.

What Have We Got to Lose?

ERSA’s portfolio of European-funded employment support, the majority of the case studies come to an end in March or April 2023. The continued insistence by the Department for Levelling Up, Housing and Communities on using these timeframes mean that ERSA members should start liaising with their lead local authorities as a matter of urgency.

Download What have we got to lose? portfolio now

This map outlines possible career opportunities in the welfare to work industry and is intended to show you the variety of progression routes that are available. However, this is by no means an exhaustive map.