Clive Pearson struggled to find employment after the recession 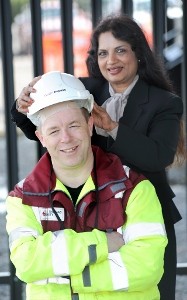 Clive, 47, was living in America when he lost his job and split up with his wife. He returned to his home city of Leicester but struggled to find employment. After six months on Job Seekers Allowance he was referred to Work Programme provider, Intraining. During his initial visit Clive and his employment advisor looked at barriers into work and created an action plan to address his needs. He attended an ‘Infit’ course run by Intraining staff to guide him through specially designed activities to help him understand his own goals.  He also attended in house employment skills courses to create a CV and to a draft letters of application. Clive also gained his Security Industry Authority badge and National Vocational Qualifications in English and Maths.

Following an interview with international consultancy and construction company, Mace, Clive was put in touch with security contracting company Elliot Thomas, who were able to offer him a contracting opportunity at Project Fox – the site of two large new data centres under construction in Leicester.

Clive said: “I never had formal qualifications as I left school at 15 years old – so I thought I could use the position I found myself in as an opportunity to study and retrain with help from Intraining.”